The research and development, innovation and improvement, foundation work and new concepts for the implementation and development of modern technology on the use of computers led to define the following pseudo-equation:

Definition. „In Computer Science, Artificial Intelligence (AI), sometimes called machine intelligence, is intelligence demonstrated by machines, unlike the natural intelligence displayed by humans and animals. Leading AI textbooks define the field as the study of „intelligent agents”: any device that perceives its environment and takes actions that maximize its chance of successfully achieving its goals. Colloquially, the term „artificial intelligence” is often used to describe machines (or computers) that mimic „cognitive” functions that humans associate with the human mind, such as „learning” and „problem solving”.

Definition. A language of knowledge is virtual system/logical

What should an intelligent agent do?

Artificial Intelligence (AI) was founded as an academic discipline in 1955, and in the years since has experienced several waves of optimism, followed by disappointment and the loss of funding (known as an „AI winter”), followed by new approaches, success and renewed funding. For most of its history, AI research has been divided into sub-fields that often fail to communicate with each other. These sub-fields are based on technical considerations, such as particular goals (e.g. „robotics” or „machine learning”), the use of particular tools („logic” or artificial neural networks), or deep philosophical differences. Sub-fields have also been based on social factors (particular institutions or the work of particular researchers).
– The traditional problems (or goals) of AI research include reasoning, knowledge representation, planning, learning, natural language processing, perception and the ability to move and manipulate objects. General intelligence is among the field’s long-term goals. Approaches include statistical methods, computational intelligence, and traditional symbolic AI. Many tools are used in AI, including versions of search and mathematical optimization, artificial neural networks, and methods based on statistics, probability and economics. The AI field draws upon computer science, information engineering, mathematics, psychology, linguistics, philosophy, and many other fields. 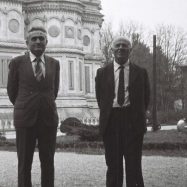